GlaxoSmithKline is set to open its new double LEED® platinum certified facility in Philadelphia’s Navy Yard Corporate Center this Saturday, ushering in a new era of how people work in Philadelphia. 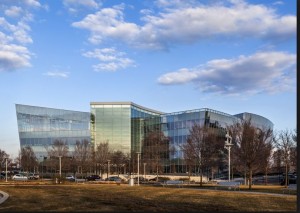 The 208,000 square foot building at Five Crescent Drive represents an $80 million investment by Liberty Property/Synterra, and an investment of approximately $70 million by GSK. GSK has signed a 15.5-year lease at the building, which includes a four-story central atrium, a monumental stairway, a coffee shop, cafeteria, fitness center, meeting centers and a large multi-purpose room.

The four-story, glass-encased building with an open floor plan and grand central staircase has been awarded both Core & Shell™ and Commercial Interiors™ LEED® Platinum certification from the U.S. Green Building Council. It is the first double LEED® Platinum building in Philadelphia. It is anticipated that the innovative building systems will save as much as 30% of energy use when compared to a traditional building.

These substantial energy savings are the result of the state-of-the-art building facade and high-performance glass which maximize daylight in winter while reducing heat gain and providing shading in summer. ENERGY STAR®-rated lighting and equipment, as well as an astronomical time clock and cloud sensor program, activate the automatic shades on windows to control glare. In addition smart meters track and monitor the building’s energy and water use and provide ongoing accountability for utility consumption and performance.