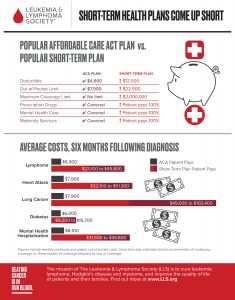 The study, conducted by actuarial firm, Milliman, Inc., is the latest in LLS’s Cost of Cancer Care initiative, a comprehensive effort to address the extraordinary cost of treating cancer, specifically the direct costs to patients. The findings are timely, as some commercial insurance companies are accelerating promotion of short-term, limited duration (STLD) health plans since the Trump administration increased the length of time patients may be covered under them. The plans are not required to meet the same minimum standards of coverage as those regulated by the Affordable Care Act (ACA) and therefore put more patients at risk of being exposed to increased costs and inadequate coverage.

Among the Study Findings:

“The findings of this study confirm what we long suspected – that the design of these plans leaves patients vulnerable to expensive bills,” said Gwen Nichols, MD, LLS chief medical officer. “Short-term plans don’t offer typical health insurance benefits and provide very little protection when a patient faces a serious, unexpected diagnosis. LLS is working at the state and federal levels to protect patients from these dangerous plans. We urge cancer patients and their caregivers to ask questions about whether their treatments are covered by these plans, given their serious shortfalls.”

LLS initiated its Cost of Cancer Care initiative in 2017, recognizing that patients and families were taking on more out-of-pocket costs for their care and treatments. LLS has engaged stakeholders across the healthcare system – drug makers, pharmacy benefit managers and insurers, healthcare providers, and other patient organizations – and called upon each to do their part to help make meaningful progress in lessening the cost burden for patients.

The new Milliman study reveals that short-term, limited duration (STLD) health plans – often misunderstood by consumers – could leave patients on the hook for tens of thousands of dollars if they face serious health problems.

The STLD plans were previously a niche product, available as a three-month bridge between coverage. With the modifications advanced by the Trump administration, STLD plans are now available for consumers to use for up to 36 months and are often marketed to consumers seeking ACA plans.

— Approximately 33% of STLD plans Milliman studied provide coverage for prescription drugs, and 42% provide mental health coverage. ACA-compliant insurance must provide both types of coverage.
— STLD plans can refuse to renew the coverage of patients diagnosed with medical conditions after they enroll, exposing consumers to potentially higher out-of-pocket expenses. Patients who are denied renewal may be left uninsured until the next ACA open enrollment period and thus responsible for the undiscounted amount billed by the provider for medical services. Preexisting condition protections guaranteed by the ACA don’t apply to short-term plans.
— More than 1 in 4 STLD plans studied by Milliman had a deductible (the amount patients pay before the plan pays anything) greater than $7,900, which was the maximum annual deductible allowed under ACA-compliant plans in 2019. In many cases, STLD plans provide less than a year of coverage, which means the deductible and maximum out-of-pocket amounts apply only for the duration of the policy.

Recent regulations have increased the availability of non-ACA-compliant health plans. Premiums will likely rise for those keeping ACA insurance, as the healthier consumers exit the ACA market.

Notably, states can determine the availability of these plans within their borders. Milliman’s analysis found that in states that allowed the federal expansion of short-term plans, this expansion along with the repeal of the individual mandate penalty contributed to about a 4.3% increase in premiums in 2020.

On the other hand, premiums for ACA insurance dropped an average of 1.2% due to regulatory actions in the 12 states that restricted or banned the expansion of short-term plans. This drop was driven by California, where STLD were banned and the re-instatement of the individual mandate penalty led to premium decreases in 2020.

In states that allow the federal expansion of STLD plans to continue, ACA insurance markets could lose up to 6% of their members to coverage that doesn’t meet the ACA’s minimum standards by 2021, according to Milliman’s analysis.

Patients, families and caregivers affected by blood cancer can turn to LLS for free emotional, educational and financial support. Information about the support services LLS provides can be found here.
To learn more about the challenges patients face and what LLS is doing to drive change, please visit http://www.lls.org/cancercost.

About The Leukemia & Lymphoma Society
The Leukemia & Lymphoma Society® (LLS) is a global leader in the fight against cancer. The LLS mission: Cure leukemia, lymphoma, Hodgkin’s disease and myeloma, and improve the quality of life of patients and their families. LLS funds lifesaving blood cancer research around the world, provides free information and support services, and is the voice for all blood cancer patients seeking access to quality, affordable, coordinated care. Founded in 1949 and headquartered in Rye Brook, NY, LLS has chapters throughout the United States and Canada. To learn more, visit www.LLS.org. Patients should contact the Information Resource Center at (800) 955-4572, Monday through Friday, 9 a.m. to 9 p.m. ET.
For additional information visit lls.org/lls-newsnetwork. Follow us on Facebook, Twitter, and Instagram.

About Milliman
Milliman is among the world’s largest providers of actuarial and related products and services. The firm has consulting practices in healthcare, property & casualty insurance, life insurance and financial services, and employee benefits. Founded in 1947, Milliman is an independent firm with offices in major cities around the globe. For further information, visit www.milliman.com.

Annalyn Frame is a Registered Nurse, currently traveling the country as a traveling nurse. She is the Editor of Health Plan News.